Bicycle Handlebars: Why are they so low? Bike handlebars are low because the design allows you to lean forward. This is called an aerodynamic position and will make you much more efficient when you ride your bike. The fact that your arms and legs have the least amount of wind resistance in this position explains why it is so effective.

Low handlebars, such as those on track bicycles, are the norm for many competitive road cyclists. It is a common belief that lower is faster, lower is more aerodynamic, and that lower gives an upper hand when racing.

Lower handlebars typically allow the hands to be closer to the rider’s body, but it also decreases the mechanical advantage of the rider’s arms over the front wheel. While some cyclists prefer lower handlebars for greater power output and stability, there are many myths about this, and it is not the best solution for many riders.

Beginner riders typically try to set their handlebar height to be even with the seat height.

Having the bars at this height provides a more comfortable position while sitting, which is important when you’re on the bike for long periods of time.

The main difference between handlebar positions

The handlebar position is something every cyclist considers when buying a bike, especially when it comes to comfort. Generally, a higher handlebar will be better for those who are after comfort. The lower the handlebars, the more aerodynamic you’ll be – if you can cope with the less-comfortable riding position.

The pros of having a lower handlebar

Bikes with low handlebars allow riders to be closer to the ground, making obstacles easier to navigate because of the low center of gravity. When combined with lighter weight frames, this leads to an increase in agility, stability and control on a variety of surfaces (even those covered with mud).

Another main benefit is safety. There are many potholes, sidewalks and other obstacles that bike riders need to avoid on their travels. Most cyclists would also say that this type of lower stance improves balance too, again because of greater control.

It’s also easier to ride and corner aggressively on a bike with low bars. More and more companies are designing their bikes with low bars as well as other upgrades such as wider tires and lighter frames, which make these bicycles ideal for a wide range of riders.

The cons of having a lower handlebar

The biggest disadvantage of low bike handlebars is that they limit the flexibility of the cyclist’s upper body. Low handlebars make it difficult to turn one’s head from side to side or gaze up at traffic lights.

The lower you go on the handlebars, the more you are likely to strain your back and other parts of your body. This is because, with a lower handlebar position, your weight is placed more towards the front end of the bike, with a corresponding decrease in weight on the rear wheel. This change in weight distribution can decrease the power you can produce on the pedals and the overall comfort of your ride.

Low bike handlebars also force bikers to face downward rather than upward, which might cause neck problems if they ride their bikes every day. This problem also causes cyclists to ride while holding the back of their seats in order to see ahead.

By reducing the upright position of the cyclist, handlebars that are too low can cause a number of issues. Some of the most common problems with lower handlebars are neck and back pain, reduced power output, and injury caused by improper body positioning.

When choosing bike handlebar height, most cyclists take into consideration their general riding style and the type of bike they ride. For example, on a rough and tumble bicycle capable of tackling many different terrains, riders may opt for lower handlebars. Meanwhile, on a dual-sport or trail bike designed for long distances, many riders opt for higher bars.

The general rule of thumb for bike handlebar height is that the straight part of the bar should be at least as high as the bike saddle. Any lower than that might put unnecessary strain on your wrists and upper body, especially when riding for long periods. Inflatable Tires with Air: Why do bicycles have them? What are the best Bikes for Children to learn on? 4 Reasons Bikes Have Spokes: Plus All 4 Types 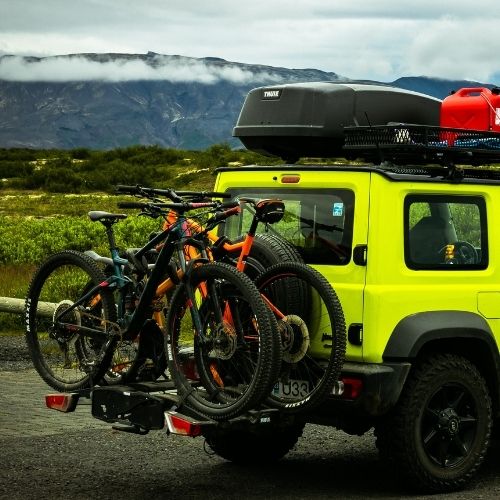