Here are two bike types that look very similar but were put on this earth for very different reasons. Whether you are looking to upgrade your ride, buy your first ever bike, or just curious about the difference between a gravel bike vs road bike, you have come to the right place.

Let’s start by talking about what the two types of bikes are designed for.

What is a gravel (adventure) bike?

A gravel bike or adventure bike, as they are often called, looks very similar to a road bike. The design has evolved from a road bike to create a machine that can do more than be fast on the road. Gravel bikes allow you to go off-road in confidence.

Thanks to their low bottom bracket, wide grippy tires, and long-wheelbase, you remain in complete control of a gravel bike, even on uneven surfaces.

However, gravel bikes also share some of the characteristics of their fast road dwelling predecessors. The dropped bars on gravel bikes give you more options for your hand position and allow you to get into an aerodynamic position if you are on the road and need to build up some serious speed.

On a gravel bike, you will be able to build and maintain speed on the road, in addition to being able to enjoy an adventure off the beaten track.

What is a road bike?

Road bikes are built for speed. Although you can get different frames, they all have one thing in common: an aggressive riding position. This allows you to “tuck” your body in and reduce your surface area.

Allowing you to build up and maintain speed easier. The lightweight frame combines with the thin and often smooth tires to reduce road friction and drag, helping you convert all your legs’ power into forward momentum.

If you have no desire to go offroad, then a road bike is a no brainer. They help to make you faster and are very comfortable on the road. Generally, they have a short wheelbase, which means the handling is responsive and the steering snappy.

Although technology has come a long way and the most expensive road bikes cost thousands. You can get a good quality entry-level road bike that is an absolute joy to ride (on the road) at a price that will not break the bank.

Should I get a road bike or gravel bike?

Do you want speed alone or freedom to take your bike on any adventure? If you are just looking for a bike to ride on the road, buy a road bike.

However, if you live in the countryside or think that once you build up your fitness, you will be taking your bike to your local, national park to try out some of the trails, skip the intro and go straight for a gravel bike.

Gravel bikes are still rapid, and the fact that they can hold their own off-road makes them a better long term investment.

Can you use a gravel bike as a road bike?

One of the best tings about a gravel bike, is the capability of being able to use it for multiple purposes! This includes using it as a road bike.

Sure it has bigger tires, which makes it somewhat slower going than the road bike, however the overall functionality is there, meaning unless you are the most dedicated road bicyclist, you likely will have no problem using a gravel bike instead of a road bike as your primary transportation.

Can you use a road bike as a gravel bike?

On the other hand, it is much more difficult to replace a gravel bike with a road bike, especially if you are planning on actually using it on gravel.

Road bike tires have thin tires that don’t have the capability of soaking up the impact of going anywhere but on pavement. This along with the fact that those thin tires also won’t have the surface area to keep you moving forward in mud and loose gravel means that a road bike just can’t replace a gravel bike.

Are gravel bikes good for touring?

Another big category of bikes, is the touring bike! A gravel bike does an awesome job for this, as there are plenty of ways to carry things with you, including bags and luggage.

Their reliable design, due to lack of suspension and a simplified gear set means they can be taken for long distances without any worry.

How much slower is a gravel bike than a road bike?

While we talk a lot about the fact a gravel bike is slower than a road bike, it is marginal in the long run, which is why many times we would recommend getting the gravel bike with its more capable design.

Gravel bikes are considerably faster than a mountain bike, as you have thinner tires and a more aggressive stance that allows for better aerodynamics, resulting in more speed.

Can you jump a gravel bike?

Gravel bikes and road bikes have many similarities, as the gravel bike is to the road bike, as a hybrid bike is to a mountain bike. However if you are not a time trial style road bicyclist and live somewhere that has rougher terrain or even potholes a gravel bike might be a better solution for you.

However if you like to go fast, and have good roads a road bike is probably your best option! Can you ride a hybrid bike on gravel? What Type of Bicycle is Good for Delivery Services? 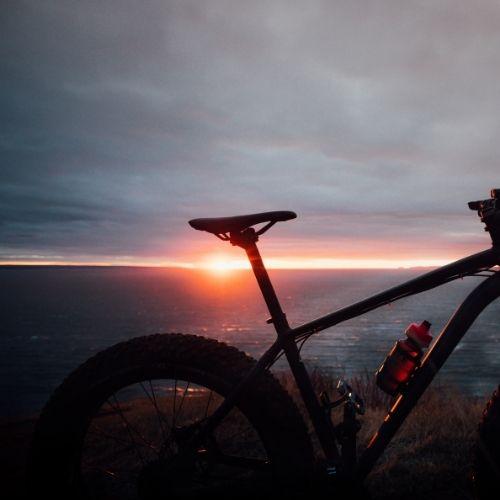 Fat tire bikes: Are they at all comfortable to ride?