Can I Turn My Mountain Bike into A Gravel Bike? There are many people who are not aware of the extreme functionality and features of gravel bikes. The gravel bike isn’t a new thing as it is also assumed as a mountain bike from the nineties, as they proclaim. There is some amount of truth in everything, but they’ve forgotten a vital thing, that it’s fun to ride a gravel bike. Gravel bikes are an escape from crowds, cities, and busy roads, as gravel riding can open up many opportunities to ride in an unrestrained manner besides the concrete road network.

Changing a Mountain Bike to a Gravel Bike

If you already own a mountain bike and wish to have a gravel one instead, it would be best to convert your existing bike or the frameset into a gravel grinder while keeping the entire process under a small budget. Yes, it is totally possible to change your mountain bike to a gravel one, but it would require significant changes in a lot of bike parts. The extent of changes would vary according to the bike, as some gravel types can only require a tire or a handle change while in others you would have to change almost everything. Also, there are fair chances of complications as plans always don’t work accordingly.

You can begin by altering the gearing system for suiting the requirement of your gravel bike. Gravel bikes can easily operate quickly. Therefore, they would also need more gears compared to their mountain counterparts. Converting mountain bikes to gravel ones needs a gear upgrade.

Also, you can increase the number of gears to the ideal amount. Even while increasing the total gears, you shouldn’t forget about maintaining the suitable 2:1 ratio. Both the mountain and gravel bikes work with the same gear ratio.

You’ll need to do more than only increasing the number of gears. After upgrading the maximum speed, the next thing you require is raising the suspension. You’ll also realize that is necessary as the gravel bike generally travels paths and areas with tough obstacles like pebbles and rocks.

As mountain bikes have been designed for only rough terrain, to convert it to a gravel bike you’ll have to add more versatility to it. Increasing suspensions can also do that same trick. However, how would it work? When you’re making such a change, it also ensures a suitable clearance between the surface level and the bike.

After installation of the right disc brakes, it will last for long without any wear and tear. Brakes of gravel bikes can survive for long as the weight of the bike is low and low wear and tear is experienced at brake discs. The brakes can also endure high pressure.

Due to the frequent trails on rugged terrain gravel bikes need to have higher quality shock absorbers than mountain bikes. Due to this conversion of mountain bikes to gravel, it would be vital to change the suspension or convert them to handle more uneven terrain.

Finally, it’s time to get the right tires and replace the old ones. You need to ensure that you’ve installed tires that serve a new purpose. Mountain bike tires are typically wide, thick, and heavy. The design is ideal for winding paths or roads. On the contrary, the tires of gravel bikes are generally agile and narrow.

Therefore, when you expect the mountain bike to work like a gravel bike, you’ll have to get a significant change in parts to ensure the best outcomes. Likewise, you’ll also have to make sure that the new ones are narrow to get agility while you’re moving. Further, the make the converted gravel bike handle challenges with rocks, pebbles, and gravel, you’ll need to get it lighter. You’ll also need to shed off any unnecessary accessories for making the mountain bike able to handle rough terrain.

Converting a mountain-type bike to a gravel one shouldn’t be a difficult process. With the aforementioned steps, you can easily get success in the DIY process. You’ll need to assemble tools to ensure that things work out your way and you quickly get the desired outcome. Can You Ride a Mountain Bike On The Road? 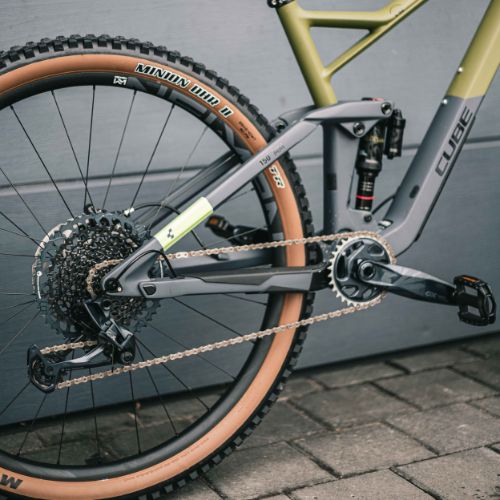 29-inch Wheel Bicycle: How Tall Should You Be to Ride One? How do I know what bicycle chain to buy?